Disney Epic Mickey
Disney Epic Mickey is an action-adventure platforming game for the Wii console that sends Mickey Mouse on an epic journey of creativity and discovery. As Mickey, the player is propelled into Wasteland 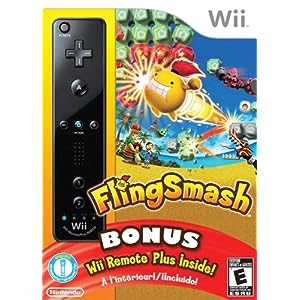 FlingSmash with Wii Remote Plus – Black
A tropical island must be cleared of invading enemies and crazy obstacles. Only your expert aim and pitch can get it done! 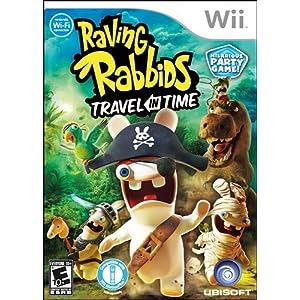 Raving Rabbids Travel in Time
The Rabbids are back! Get ready for a rough ride as you travel with them back in time (in a washing machine!) Look out history! Great fun and huge laughs with the Rabbids!

iCarly: iJoin the Click!
Carly and the Gang return to Wii, and you’re there to socialize with all the characters from the show and meet up with them to make new iCarly webisodes! As a newbie student at Ridgeway, meet and hang

Megamind
When the Megamind movie ends our story begins! Just as Megamind has become our new Mega Hero, a sudden crime wave hits the city. The Doom Syndicate & their Doom Goons have emerged and are looking to t

Naruto Shippuden: Dragon Blade Chronicles
Unlock the elemental powers of the Dragon Blade to save the world! Join Naruto, Sasuke, and all of your favorite NARUTO SHIPPUDEN characters on an exciting new adventure! Faced with the end of the wor

Super Hero Squad
Welcome to Super Hero City! Hero up! Assemble your squad and fight your way to victory to save the citizens of Super Hero City from evil schemes of Dr. Doom and the Lethal Legion in this multi-player

Rudolph the Red-Nosed Reindeer
Help Rudolph and the gang save Christmas! Christmas is in danger and Rudolph needs your help! Are you up to the challenge?

Sonic Colors
The diabolical Dr. Eggman has hatched another plan for world domination! He has built an amazing interstellar amusement park, floating in space around Sonic’s home planet, bursting with incredi

Guilty Party
Disney Guilty Party is a fun and hilarious mystery party game, exclusively for Wii(TM). Friends and family play as the savvy sleuths of the world-famous Dickens Detective Agency to investigate a serie

PokePark Wii: Pikachu’s Adventure
Play as Pikachu and interact with many Pokémon! Players guide Pikachu through the adventure to save the PokéPark! You can meet many other Pokémon who appear in the game and talk to them

Club Penguin: Game Day!
Play in the first ever Club Penguin island-wide Game Day challenge only on the Nintendo Wii. Create your own penguin, join a team and compete against other penguin teams in Dance Off!, Puffle Paddle,

MySims Sky Heroes
Take to the sky to lead the resistance against Morcubus and his drone army and to stop his plans to take over the skyways. MySims SkyHeroes is an all new adventure that brings the thrill and high spee

Lord of the Rings: Aragorn’s Quest
Preparations are underway in Hobbiton for a great party to welcome the legendary Aragorn, and to honor Samwise Gamgee for his service during the War of the Ring. With Aragorn’s visit imminent,

Wheel of Fortune
Be a contestant on “America’s Favorite Game Show!” Join Pat Sajak and Vanna White on the set of Wheel of Fortune. For the first time ever you can spin the wheel as your favorite M

Jeopardy
Join Alex Trebek on the set of “America’s Favorite Quiz Show!” Use your quick wits and lightning fast skills to be the first to pose your question!

Minute To Win It
Tackle unique challenges as you compete to win $1,000,000 in NBC s hit game show, Minute to Win It . With encouragement from All-American chef and host Guy Fieri, you will compete in series of simpl

Wipeout
All the Thrills and spills from the hit TV show! Run, jump and climb on the most ridiculous obstacle courses ever created. Experience the crazy Wipeouts in your living room with fun and competitive ch

Wii Party
Nintendo’s throwing the party of the year and everybody’s invited! Social Play Wii Party is a social experience for the entire family and beyond. By focusing on interactive group play t

Pictionary – Udraw
Ready Set Draw Welcome to the a whole new way to play the game of Pictionary, guess words from sketches made by other members of your team. The words can be objects, people, actions, places, animals,

Monopoly Streets
To celebrate its 75th anniversary, the world of Monopoly comes to life through a living, breathing city that you can build, own, and monopolize. Monopoly Streets has everything you love about the boar

New Carnival Games
New Carnival Games for Wii takes the family fun of the original multi-million unit seller to new heights with all new games and prizes, much requested multiplayer action for every game and for the fir

The Amazing Race
Race around the world and experience the thrill of the hit reality series with The Amazing Race video game! Grab your clue, choose your transportation, and make your way to the pit stop! Just like in

Wii Glow Racing Wheel
Super cool! This wheel glows in the dark while you are driving around at night

The World of Wii Games

Moving gamers ever-closer to the compelling world of virtual reality, Nintendo Wii offers the funnest, most original, and most interactive video games on the popular market today. Nintendo has always been a trend setter – the original Nintendo Entertainment System with it’s light gun, the black and white Game Boy, the Nintendo DS with it’s innovative stylus pen, and finally the Wii, with games that allow you to not only physically interact with the characters on the screen, but to actually become them, incorporating the motions of your body into the movements of the character in the game. I’ll never forget the first time I played the original boxing game that came with the Wii system – I stood there in the middle of my friends’ living room, Wii wand in hand, swinging like crazy and having the time of my life. Everyone has different gaming needs, and Nintendo works hard to satisfy those needs with a variety of Wii categories.

There’s a Wii-only category, which means that these particular games are available only for the Nintendo Wii. Nintendo has always been on the ball when it comes to their platform-specific games, and the Wii continues this trend of excellence with massively popular and critically acclaimed games like New Super Mario Bros, which takes the original classic Super Mario Bros platform concept and skyrockets it into the stratosphere, creating an addictive and exciting experience for gamers of all ages. There’s also the Mario Party games, which allow fans of the two adventurous plumbers a chance to combine role playing with a board game environment. Wii-only games offer up brighter and better installments of all the old Nintendo favorites, like the Contra Rebirth, Castlevania Judgment and The Adventure ReBirth, and the Final Fantasy Crystal Chronicle series, as well as Doc Louis’s Punch Out, Excite Bike: World Rally and Mario Kart Wii.

For those of us who fell head over heels for the Zapper light gun (from the original Nintendo Entertainment System), Wii offers some wicked selections from the Wii Zapper category. The Wii Zapper category is designed especially for gamers who enjoy a more adult atmosphere in their game, and includes horror classics like The House of the Dead 2 & 3 Return and Overkill, and Resident Evil: The Darkside Chronicles and The Umbrella Chronicles. Anyone who remembers how cool the shooter Golden Eye was for the Nintendo 64 will definitely want to check out the Quantum of Solace shooter for Wii. The Wii Zapper accessory started out with a shotgun design but soon transformed to a Tommy gun style that fits comfortably in the player’s hands and is easy and fun to operate.

The Wii Motion Plus category involves an accessory which acts as an expansion to the original Wii remote, allowing the player a wider range of motion and accuracy. The Wii Motion Plus expands on what is the most innovative feature in a video game system to come along in awhile – the original Wii remote and its optical sensor technology (the stuff that let me jump around the living room like a happy fool throwing punches at digital boxers on the screen). This makes a player feel as though he or she is an actual participant in the game. Tiger Woods fans will enjoy this category, as it offers Tiger Woods PGA Tour 10 and 11. Wii Sports and Wii Sports Resort are good games to pick up if you’re just starting out on the console and want to get your feet wet with some fun motion sensor games. Wii Sports includes the boxing game I’ve been going on about, as well as golf, bowling, tennis, and baseball.

Although the Wii remote alone can give a player quite the workout, the Wii offers an actual workout program called Wii Fit, and the category of games under the program are used with the Wii Balance Board accessory. It’s fitting that the Wii Balance Board is shaped like a scale, as it’s going to be responsible for shedding quite a few pounds in the upcoming years. While the Wii Balance Board can physically handle up to 660 pounds, it is designed to comfortably hold people weighing up to 330 pounds. You hop on the Wii Balance Board, move your feet according to the game’s particular directions, and next thing you know you’re working out.

Those who are interested in having fun first and working out second will enjoy Wii Balance Board games like Punch-Out!!, We Ski and Snowboard, Tetris Party, and the insanely popular game that has garnered a massive cult following, Dance Dance Revolution. For people who are only interested in using the Wii Balance Board for serious exercise, there are games like Yoga Wii, Wii Fit and Wii Fit Plus, Jillian Michaels’ Fitness Ultimatum 2009, and EA Sports Active.