Games based on movies, especially kids movies, are really a mixed bag when it comes to quality. You’ve got your great titles, and then you’ve got some that just don’t come up to par. The Wii Rango game is somewhere in the middle. There is a distinct feel to the game that tells you the developers would have liked to reach for greatness, and very possibly could have achieved it, but they were somehow cut short due to development costs or time constraints. The Rango Wii game sadly never achieves the stature and playability of past movie-tie in titles.

That isn’t to say the game isn’t enjoyable. The games segments are divided into one of three types, shooter, rail-shooter, or simple platformer, and on it’s own, each game type is pretty enjoyable and paints a pretty good picture of Rango’s life in the Wild West. Each segment is preceded by a short and usually humorous cut-scene, and there aren’t any major flaws in the game itself. During the shooting portions, the Wiimote responds accurately to where ever you’re pointing, and you really don’t get a lot of those moments where you miss a guy you know you hit.

However, the game never really strives to leave either of these three standards of the gaming industry. Jump and run, then shoot, then shoot, then jump and run, it’s easy to see how the gameplay could be a little repetitive. Also, the lack of inclusion of multi-player is almost a travesty, especially given that this is a kids game. It’s understandable that the multi-player content be limited to mini-games, like the rail-shooter or gallery sections, but to leave it out entirely just seems like a mistake. On top of that, the voices in this game are akin to nails on chalkboard, and I found myself muting the TV and going on subtitles for a good portion of the game.

There is a solid game here, though, although a simple one, and it’s a credit to the developers that they chose to go forward with their own story, instead of just rewriting the script to the move and adding some cheesey platforming concepts. The game is most definitely kid friendly, any violence portrayed is very played off and cheesey, and the makers went so far as to limit most of it to the shooting galleries.

If you have kids, the Wii Rango game might be worth a purchase, provided your kids loved the movie. If you’re a single gamer without any anklebiters, you’re going to want to pass this one up, no questions. The repetitive gameplay and cheesey voice acting might be tolerable with the kiddy set, but more mature gamers are going to be wondering why they picked this title. 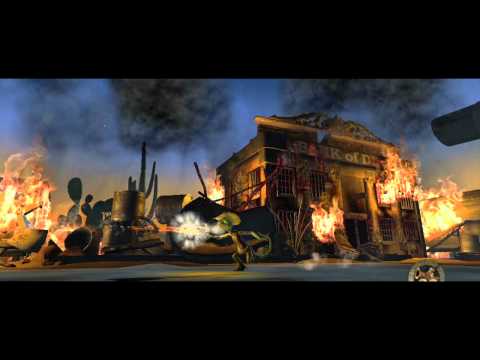